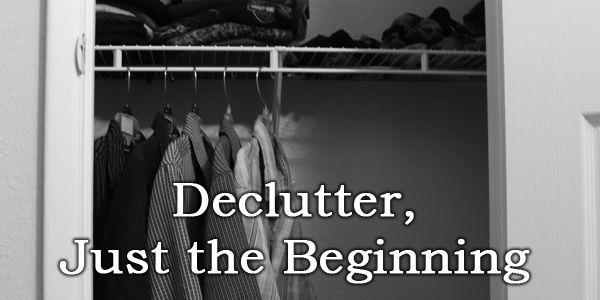 A friend is in the process of decluttering.  Her goal is to drop her huge rental house and find someplace smaller that is more manageable.  She needs to purge a lot of the items that she owns so that she will fit into a smaller place.  She needs to get rid of items that add no value to her life, and decluttering can make for a great start for this task.

She jokes with me on social media how she hates it, and how she can’t deal with owning just one white shirt.  She owns lots of shirts, but just one white shirt, and I know that she’s joking, for the most part.  I’m sure that she is also experiencing the struggle of owning less for the first time in her adult life.  Decluttering is not intended to be the end result.  Instead, decluttering is a learning process, and just the beginning.

For me, the process of decluttering became an eye-opener.  My decluttering ultimately became the beginning of my belongings purge.  As I began to declutter I would grab something that I owned that I just had to keep, and then I found a safe location for it as I decluttered around it.  I would do this quite often as I decluttered and my pile of “things that I just had to keep” grew larger.  I eventually realized that I did not own stuff, but instead my stuff owned me.  My stuff dictated what I did and where I lived.  My stuff told me that I could not move, because it would need to move it too.

After a while I would start to look at stuff that I was going to keep and realize that much of it added no value to my life.  Those things that added no value ended up being sold, donated, or thrown away.  My aforementioned friend simply has not gotten to that point where she realizes that a great deal of what she has adds no value to her life.

Story time:  When I was a little kid we had this unique cupboard for out breakfast cereal.  It was beneath the counter, and in the crease of the “L” shaped corner.  The cupboard was basically a multi-shelf lazy Susan behind an “L” shaped door.  I would sit on the floor in front of the cereal and slowly roll it around and around and around trying to decide which breakfast cereal that I wanted that morning.  I had so many choices, and I had a hard time choosing.  I could have been off playing, or doing something more constructive, but instead I sat there on the floor trying to make a choice.  Imagine what more I could have accomplished in life if my cereal choices were reduced.

Imagine what else you could do with your life if you had only one white t-shirt, and you didn’t need to choose which white t-shirt that you needed to wear.

In 2013 I got laid off. I worked for this global corporation for six years. I was a member of what … END_OF_DOCUMENT_TOKEN_TO_BE_REPLACED

Keeping up with the Jones' is probably the most prevalent reason why people overspend.  We see our … END_OF_DOCUMENT_TOKEN_TO_BE_REPLACED

A friend is in the process of decluttering.  Her goal is to drop her huge rental house and find … END_OF_DOCUMENT_TOKEN_TO_BE_REPLACED