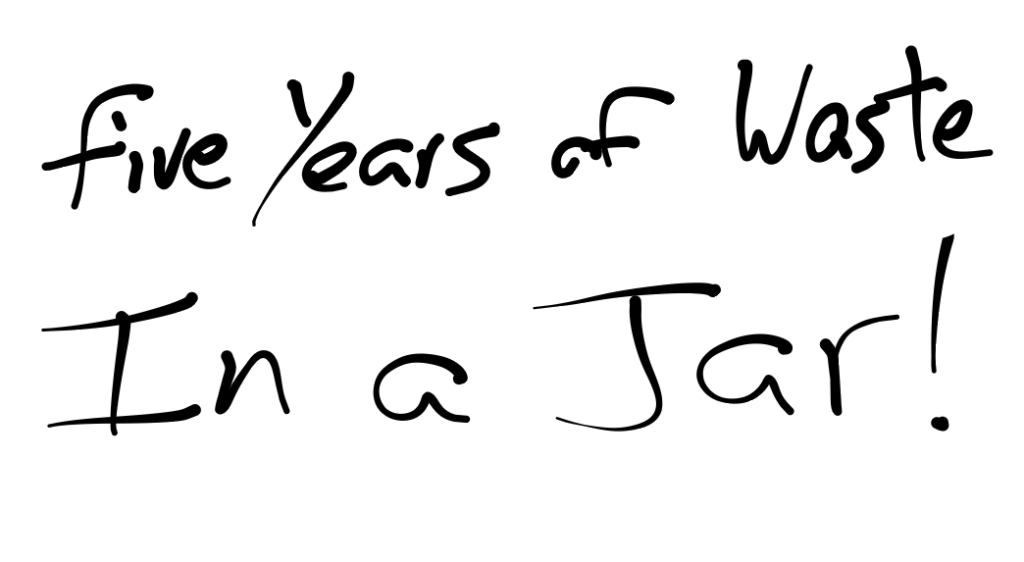 Recently I watched a video that was an inspiration.  The video was about one minute long, and it was about a teenage girl that strives for zero waste.  In the video she had a jar, about the size of a pickle jar, and it was filled with waste.  The girl goes on to describe the waste in this jar as her total waste over the past five years.  I thought that was absolutely awesome, but after I pondered the reality, I had to call total B.S.

Don’t get me wrong when I call B.S. on her story.  I’m sure that she did a lot to reduce her waste, but there is no way that the jar contained all of her waste over the past five years.  She described ways that she reduced waste, and we all should strive to do the same.  She described items in the jar as such things as straws, ribbons from presents, tags from new clothing, and a few other things.  But come on, where were the purchase receipts, where was the packaging from her mobile phone, and where was…..um…..what would represent the t.p. that she used?

Again, and again, and again, I must give kudos to her efforts.  She also explained some of the things that she did, things that we all should do to reduce waste.  She said that she bought food in bulk, and put it into her own reusable containers.  She would also make her own makeup and hygiene products, thus eliminating the packaging waste.  Her video stated that Americans produce on average four pounds per person, per day of waste.

A study from Utah.edu states that the average American will personally throw away 600 times their body weight in trash.  This equates to 90,000 pounds of trash by the end of one’s life.

As a minimalist I try to purchase less, which in turn reduces my personal refuse.  But I know that I can do more.  This morning I went out for breakfast and had a delicious bacon, egg and cheese sandwich, and coffee.  I know, I shouldn’t have, but I just had to.  This endeavor produced one paper cup, one plastic lid, one paper bag, two wrapping papers, and four paper napkins.  In addition, add one customer receipt, one store travel receipt, and two sticky tickets that traveled with the sandwiches.

If I had prepared this at home I would have saved refuse, but by how much?  If I had eggs, I would eventually throw away the carton.  For bacon, there is plastic packaging, and for coffee there is a bag for every pound of coffee, not to mention the coffee filter.  So, even if I try to reduce my refuse, I do not believe that producing zero waste is even remotely possible in America.  But that doesn’t mean that we don’t try.

So what can I do to help reduce waste?  I will soon post my declaration for reducing waste, but for now let’s just take a look at the possibilities.  I’m starting with never again using a disposable coffee cup…..ever.  This really isn’t difficult.  I really don’t “need” coffee, and if I do drink it while away from home I can bring my own cup.  And if I don’t have my own cup I could find some other type of cup, or just not have coffee at that time.

There are many things that we can do in our lives to minimize waste, and it does matter, but how much can a personal endeavor matter?  I used to go to Starbucks and order coffee and food.  The cashier would ask if I wanted my receipt, and I would say “no”.  I would expect that the cashier would not print the receipt per my request, but no, they would still print it, and then they would place it in the trash.

My upcoming declaration might include to do what I can to work with Starbucks to stop printing receipts for those that do not wish a receipt.  I just may extend this effort to other companies such as Kroeger Foods, Whole Foods and other fast food restaurants.

Divorce.com’s number one reason for failed marriage is finances.  The same list shows that “time” is … END_OF_DOCUMENT_TOKEN_TO_BE_REPLACED

Let's talk coffee.  I could debate good coffee vs. bad, or Starbucks vs. your local … END_OF_DOCUMENT_TOKEN_TO_BE_REPLACED