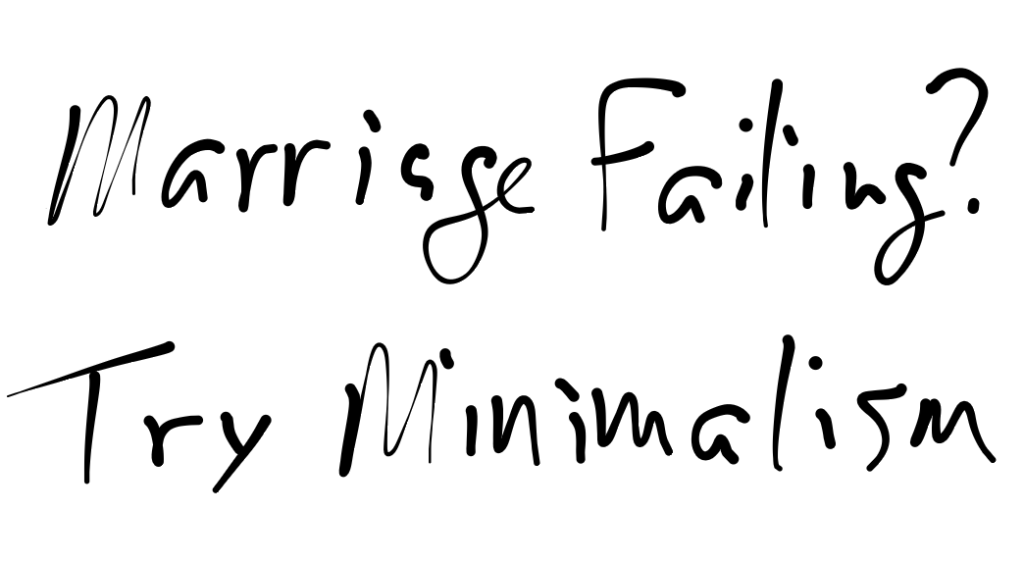 Divorce.com’s number one reason for failed marriage is finances.  The same list shows that “time” is the tenth reason.  With a slew of reasons in between, these two reasons are the root of stress which can be diminished by minimalism.  Could minimalism save your marriage?

Wow, that was deep.

When we spend too much money we put ourselves in a position of having a lack of funds.  More often than not we overextend ourselves in the form of credit, which eventually needs to be paid back.  When we add together our credit card bills, mortgage payment, and car payments, with our health insurance payment, food cost, clothing cost, cost to raise children, utilities, and whatever else you pay to live, what’s remaining?  The difference between what you make and what you spend can lead to a great deal of stress in your marriage.  We worry (and argue) about how we are going to pay our bills instead of enjoying life.

Basically we spend too much.  We spend more money and commit more time than we have.  In time we can acquire enough cash to pay for our financial overspend, but we can’t buy more time.  Many couples unnecessarily over extend themselves in efforts to enrich their lives, which ultimately has the opposite effect and leads to undo stress.  Couples spend way more money than they have and they spend a good portion of their time working more hours trying to pay for it.  When you overspend your money and time, there is little to no time remaining to maintain a relationship.

Do you argue with your spouse about finances and time together?  What is it that you argue about?  Is it that staycation because you can’t afford that African Safari?  Which, by the way, a staycation is much more the lifestyle of a minimalist than an elaborate African safari vacation.  Are you stressed over spending for that new home, or new car, or new ….?  Really, think about it, is your relationship at jeopardy because you are stressed about your lack of money or time?

Minimalism is about reducing.  We reduce our spending and we reduce our commitments.  When we spend less money on stuff, we owe less.  When we commit less, we have more time to spend on those things that matter.  Basically, minimalist do our best to reduce the stress in our lives so we can enjoy more of it.

Living minimal has a two-fold advantage when it comes to spending.  First, when we spend less we have more (both time and money).  Also, when we live the minimalist lifestyle, we find the simple things in life so much more enjoyable.

What would happen to your marriage if you simply STOPPED SPENDING?  Can embracing minimalism save your marriage?  With money and time being two of the ten top reasons that marriage fails, maybe you could.

Please share this if this has helped you, or if you can help somebody.  Your input in the comments below is always appreciated.

Divorce.com’s number one reason for failed marriage is finances.  The same list shows that “time” is … END_OF_DOCUMENT_TOKEN_TO_BE_REPLACED

Hey everybody.  First and foremost I apologize for my absence. For those that have been keeping … END_OF_DOCUMENT_TOKEN_TO_BE_REPLACED