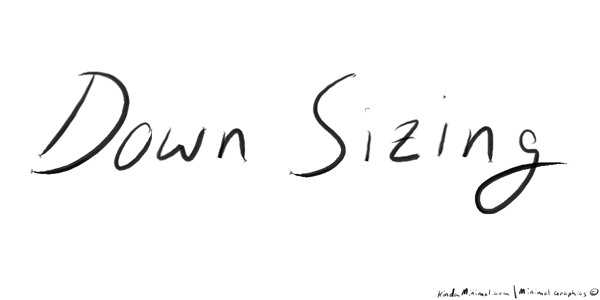 As time passes, we accumulate.  We keep accumulating and we keep trying to keep up with the Jones’.  The more stuff we get, the larger the space we need to put our stuff.  As we get larger spaces to put our stuff, we have room for even more stuff. This is an endless cycle of personal destruction. Before we know it we are burdened with stuff.

While there are countless reasons why a person would downsize, three reasons are most prevalent.  The most accepted reason is because of the empty nest.  Children have moved out of the house, and now that four bedroom mansion is no longer required.  The other two reason have stigma attached to them.

The second is due to unexpected financial troubles.  This can happen to anybody, and for many reasons.  Reason can include loss of job, unexpected medical costs, or just poor financial planning.

Thirdly, we simply over extend ourselves. We try to keep up with the Jones’ and it ends up hurting us. We have a huge house, cars, phones, ATV’s, boats, game consoles, TV’s, loads of furniture and appliances, and the list goes on. Just look around your house, and your garage, and look at all of your stuff.

I had coworkers that were (are) married. They had good jobs, and good pay checks. They had a house on somewhere between 20 to 40 acres, horses, horse trailers, ATV’s, and a lot of stuff. They also had a special needs child. After a while they realized that they could no longer keep it up. Horses demand care and feeding, and the acreage required a lot of maintenance. They had everything that they wanted, except peace. “While excess consumption leads to bigger houses, faster cars, fancier technology, and cluttered homes, it never brings happiness (The more of Less)”.  I applaud them for downsizing. They sold their property, gave their horses to their parents, got rid of a lot of stuff, and moved into a management house. They were much happier, and had more time to attend to their child. Downsizing for some is just a logical choice.

For me, minimizing was both a logical decision and a necessity.  When people hear my story about my purge, they always comment that they could do, at least to some degree.  When people downsize they often fear what people are thinking about them.  Since downsizing has a stigma of financial difficulties, people hesitate to do.  My advice, just get it done.  Start with the little stuff, kind of a whole-house clean up, and then go from there.  Even if you only get part way to your goal, at least you got somewhere.

Good luck, and make it happen.

If you struggled with this issue or can inspire others on this subject I would like to hear your story.  Please comment below.

OK, it's time for you to move.  You're job is now in a new city and it's time to pack it all up and … END_OF_DOCUMENT_TOKEN_TO_BE_REPLACED

So here's the scoop.  I'm a minimalist, well at least kinda minimal.  I have things, but I have very … END_OF_DOCUMENT_TOKEN_TO_BE_REPLACED