Keeping up with the Jones’ is probably the most prevalent reason why people overspend.  We see our friends and family with bigger, better things and we have to have them.  Not only are we trying to keep up with the Jones’, but we unintentionally end up setting ourselves up for failure.

We used to park our vehicle outside.  Then we built an overhead shelter.  This grew to a garage, then a double-car garage, triple-car garage and even larger.  Not only did the garage grow, but so did the house.  Below is a graphic showing average homo sizing in 1910 vs. 2010 (click graphic to link to original source).  We haven’t gotten any larger as human beings, so why the increase in home size? 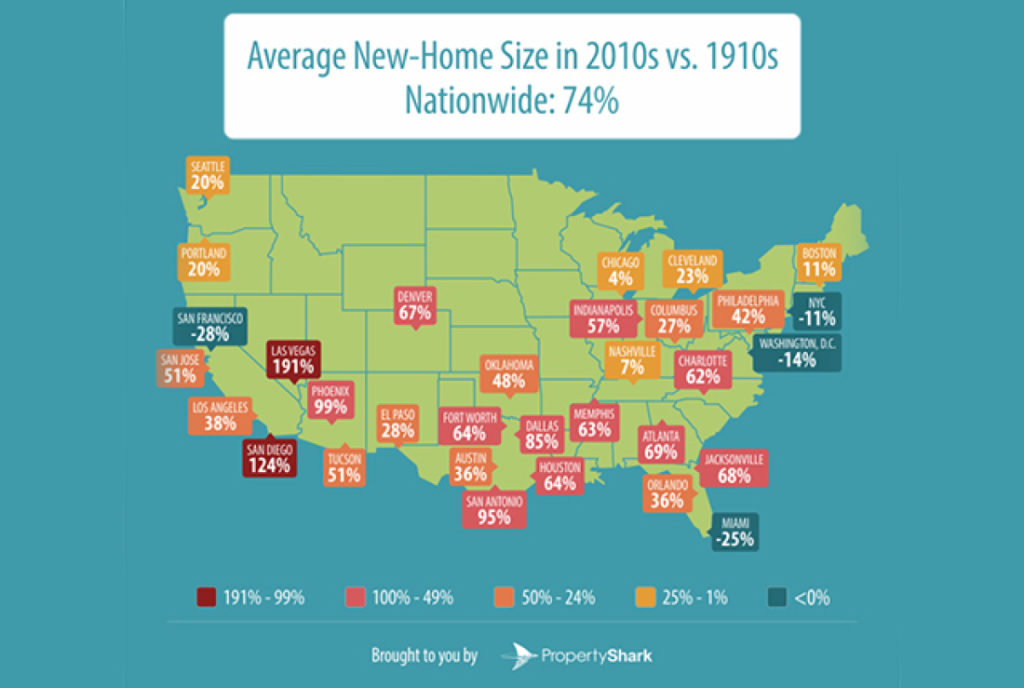 The simple answer is vanity.  A larger home is a status symbol.  A larger home means that we are doing better in life, right.  Unfortunately, when we have more space, we have empty space.  We eventually feel the need to fill this space.

Story time: My cousin had a very successful landscaping business.  He had two kids and it was time for him to build a house.  He had architects draw up the plans and get them approved by the city.  He had his plot laid out with rope and he stood where the kitchen would be built.  He realized that the area was not big enough.  He told the architects to push a couple of walls out a few feet.  The architects argued that the build would be delayed because this meant a bigger roof, and all of the structural calculations would need to be resubmitted to the city.  My cousin didn’t care, he just wanted it done (and it looked gorgeous when it was done.)  After delays and spending more money, the house was built.  My cousin had all of his stuff moved into the house when he realized that he didn’t have enough stuff to fill the house.  What do you think he did, you guessed it.  He went and bought more stuff to fill the house.

My cousin is a very smart guy with a wonderful family.  But he fell into the trap that most of us fall into.  Eventually after the kids moved out, then he sold the house and found something more appropriate for an empty nest.

Take another look at the map.  There are areas that people have chosen to live in smaller houses.  But these are not the norm.  These locations, like San Francisco, companies are building as small as possible and selling for much, much higher than anybody should be spending for a home.  The smaller home size in this area is not my choice, it is more of a mandate by the exorbitant cost of living in these areas.

Maybe houses were too small in 1910.  Maybe the economy didn’t support building larger homes.  Personally, I would be happy in a tiny home, if it weren’t for the fact that I’d have to climb a ladder to get to my bed (I’m done with stairs).  I would most definitely concern myself more with quality than quantity.  A small, well-built home has much more appeal than a larger home that needs my constant attention.

Do you really need to put your stuff into storage?  Are you better off getting rid of it. Many of … END_OF_DOCUMENT_TOKEN_TO_BE_REPLACED

By now we've all seen them.  The infamous tiny house.  They are made of regular house construction, … END_OF_DOCUMENT_TOKEN_TO_BE_REPLACED

No job is guaranteed to be there tomorrow.  Layoffs happen.  If you get laid off tomorrow, are you … END_OF_DOCUMENT_TOKEN_TO_BE_REPLACED